Walk past one of these establishments (there’s one in Islington, Soho, London Bridge and a few other locations) and there will be a queue. No matter what time of day. You’ll think by going for a late brekkie or very early lunch you’re beating the system but no – several others would have had the same plan. 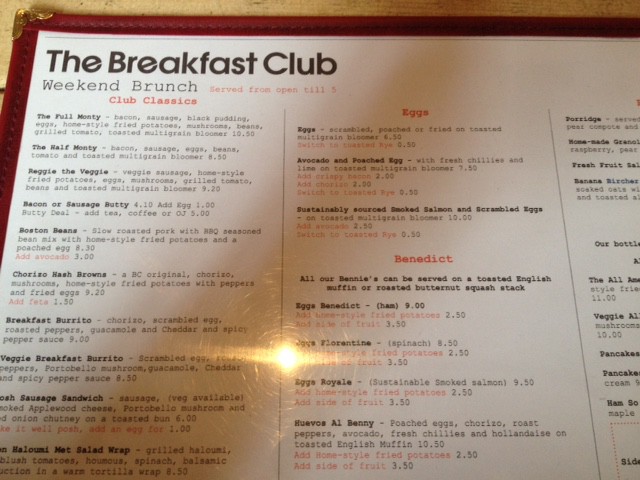 We waited thirty minutes for a table at The Breakfast Club, which compared to other places is quite a short amount of time. If you’re willing to do the time, it certainly is worth it, but it can be quite a spirit dampener if it starts raining. 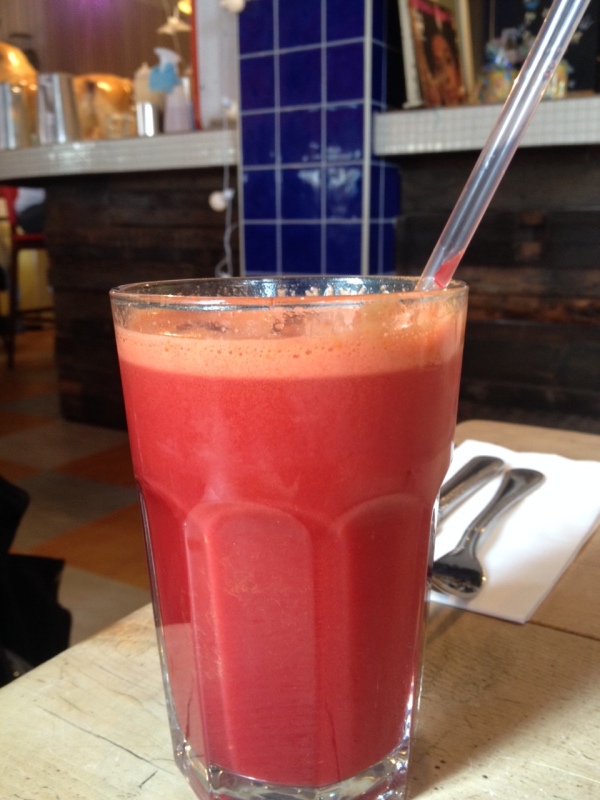 The menu is very traditional American style, with a nod to modern taste too (hiya, avocado). The full English has pride of place so we thought we’d give it a go, along with the Boston Beans.

A pretty picture it isn’t but if you’re looking for a warming, filling start to the day you’ve got it. Boston Beans is basically a bowl filled with slow cooked pork, barbecued beans, onions and chopped potato, with a poached egg on top. We added avocado to ours (not pictured) for a small cost which added a real creaminess to it. 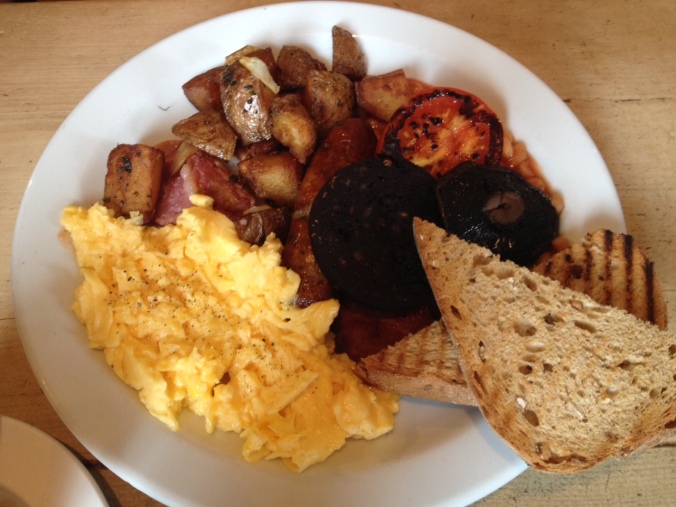 We were worried that with the demand to get in, the atmosphere would be hectic and rushed but we were able to take our time. The decor is very kitsch; there’s something to look at in every corner.

We ate around 12:30-1pm and didn’t need to eat until around 8pm that night, so a good feast all round.

We’ve already had dinner here on a number of occasions and it’s just recently that the Great North Wood have extended their opening hours to offer a brunch option at the weekend.

If you’re looking for super healthy, you might struggle. If you’re looking for hearty, you’ve hit the right spot. It’s basically gastro brekkie. For die-hard caffeine fans you’ll be pleased to hear hot drinks are served in huge cups, while healthier smoothies are on offer, too. 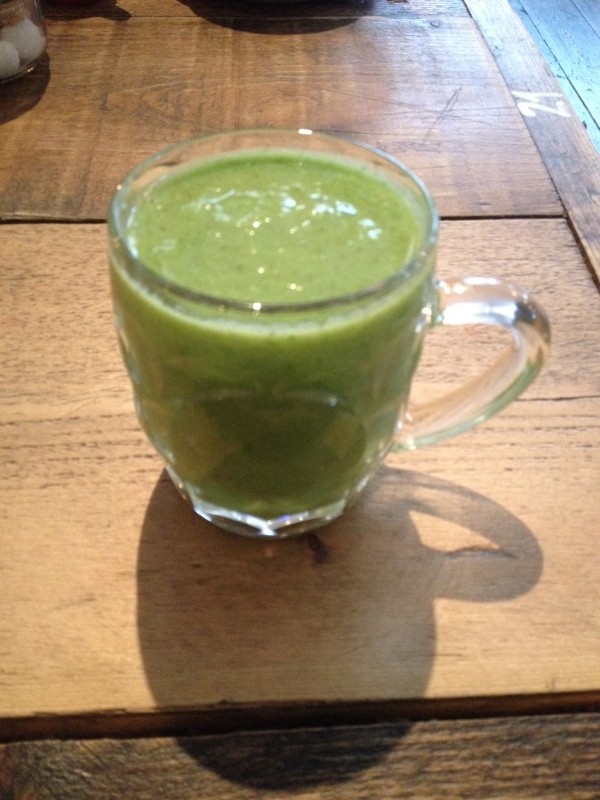 Probably the healthiest thing to be served in a dimple glass

The menu is quite traditional brunch fare, but more imaginative than your typical greasy spoon. We tried the avocado on toast (complete with egg and chorizo – which can be substituted for salmon), French toast and a dish comprising of baked eggs, bacon and ‘Boston’ beans – smokey, rich, saucy.

Avocado, egg and chorizo on toast

Prices range between about £6-9 – add drinks and you’re probably paying up to £15 per person.

French toast featuring bread the size of a doorstopper

While the pub fills up during the day, only two other tables were occupied while we were there, so it’s worth chancing your arm and making a spontaneous visit, especially when it gets warm enough to eat outside. 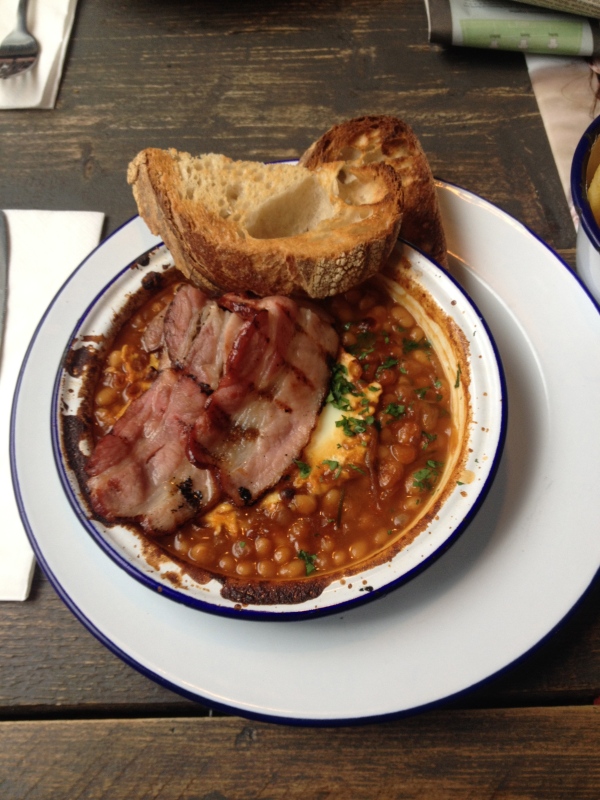 Baked eggs with bacon and beans. Bigger than it looks

One of the nicest things about brunch here is the pace – there’s no hustle and bustle like in cafes, no rush to clear your table, and there’s newspapers to hand too. It’s all too dangerous to watch brunch turn into afternoon drinks…

A fully booked Brockwell Park Lido Cafe meant that The Commercial was our second option for brunch on a sunny Saturday. Usually an ideal pit-stop for Sunday lunch in-between pottering around the market, their early doors food option isn’t to be sniffed at.

Doors open around 11am and while it’s empty, you’re pretty much guaranteed to get a table if you’re in the area and feeling spontaneous (which is quite refreshing, really. It’s maddening when you have to plan ahead all. the. time.).

The ‘Breakfast of Champions’ for two at The Commercial

The brunch menu is varied enough to suit all tastes, although it really is a meat lover’s heaven – you even get black pudding with the full English. 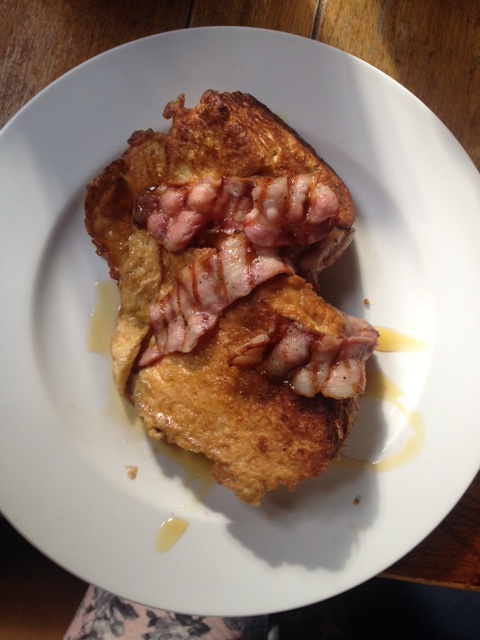 The showstopper has to be the Breakfast of Champions, served in a huge frying pan for two people (or, you know, one super hungry person). The pan is filled with fried eggs, sausages, bacon, bubble and squeak, black pudding ‘cheeky’ beans (a new one on us, they tasted like regular beans but never mind) and tomatoes.

Other highlights included Eggs Royale and their Eggy Bread with Grilled Bacon and Syrup – you’ll be fed and watered for around £10 – not too shabby. Empty plates all round from us.

Think of swimming pool cafes and limp sandwiches, milky cups of tea and the faint whiff of chlorine comes to mind (we also had a Slush Puppy machine at our local one back in the day, a rare treat after a lesson).

Anyway – Brockwell Lido Cafe certainly breaks with tradition. This place has even won awards it’s that good. After a sweaty Park Run we joined the queue for a table on a recent Saturday morning. Word of advice; if it’s warm and you want an outside table, book a few days in advance. Seriously. This place gets busy, but the service is so swift and cheery that it doesn’t feel cramped or stressful.

The ceiling at The Lido Cafe, Brockwell Park

The morning menu is typical brunch fare – pancakes, eggs benedict, salmon, full English, along with smaller options like granola, pastries and bacon baps. Prices vary between £2.50-£11.75 so there’s something for every budget.

The portion sizes are plentiful – although we wouldn’t have turned down the offer of second helpings if the option arose. 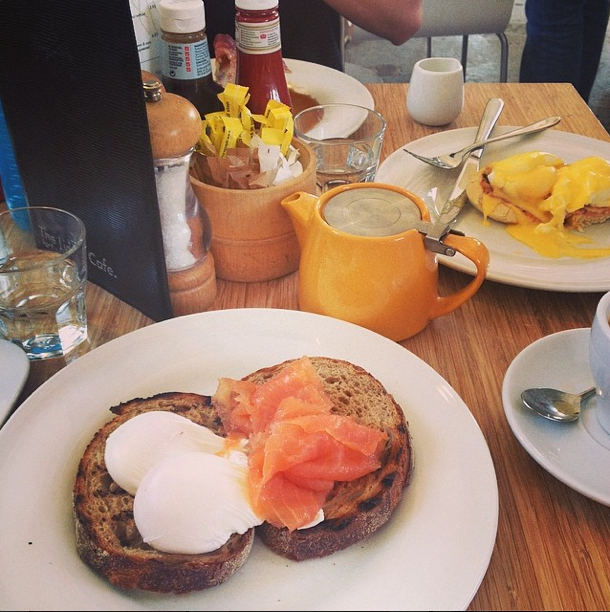 We tried and can happily recommend the pancakes, eggs benedict and smoked salmon and poached eggs.

The lunch and dinner menus, with their long lists of meats and cheese, look pretty impressive, and change every month with the seasons, so this really isn’t your typical leisure centre cafe.

There’s links to other local businesses too. Brockwell Lido members get 10% off orders (the perfect way to refuel after a swim, right?), as do Ritzy (Picturehouse) members. Find out more about what the cafe has to offer on their website. We’ll definitely be back.

Formally Le Petit Bistro (which admittedly we never visited), we tried to get into Milk during Saturday lunchtime to no avail. We ended up at The Fat Deli (which will be posted in the near future) but Sunday brunch was a success. And then cake… 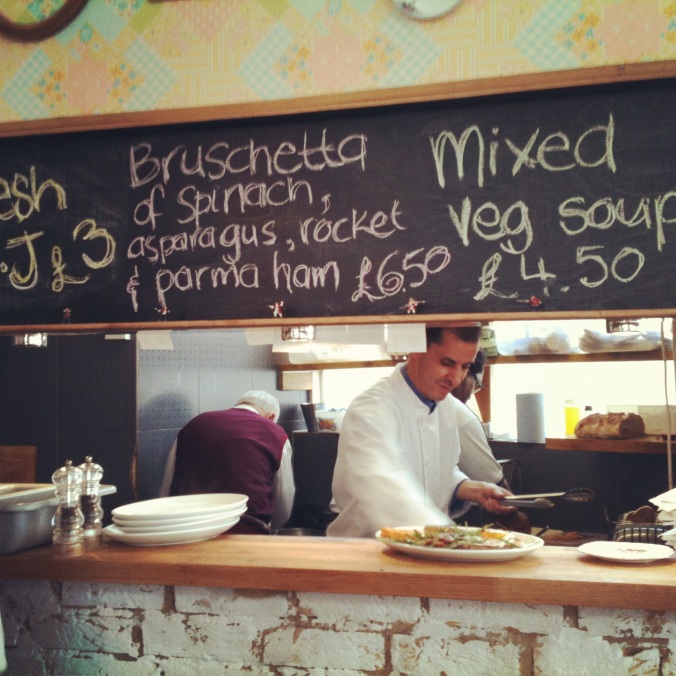 Hildreth Street is a little hit and miss if we’re being honest. There are a couple of great spots – Fara, The Wine Tasting Shop, Bunka Boutique – but there are far too many closed-down shops on that route, which is a shame because as a pedestrianised spot it could make a really great shopping spot. Hopefully the recent addition of the weekly Hildreth Street market will encourage this.

Anyway, back onto Milk. It’s a small setting but they’ve made the most of it – cramming tables in but you don’t ever feel like you’re on top of each other. The kitchen area is impressively small; they obviously have a bit of a slick operation going on to produce and serve cooked food to hungry punters. The brickwork and wallpaper are very shabby chic indeed; like a big family kitchen in the country. There’s some space outdoors without having passers by squeeze past – it will make an ideal people-watching spot come the warmer months. 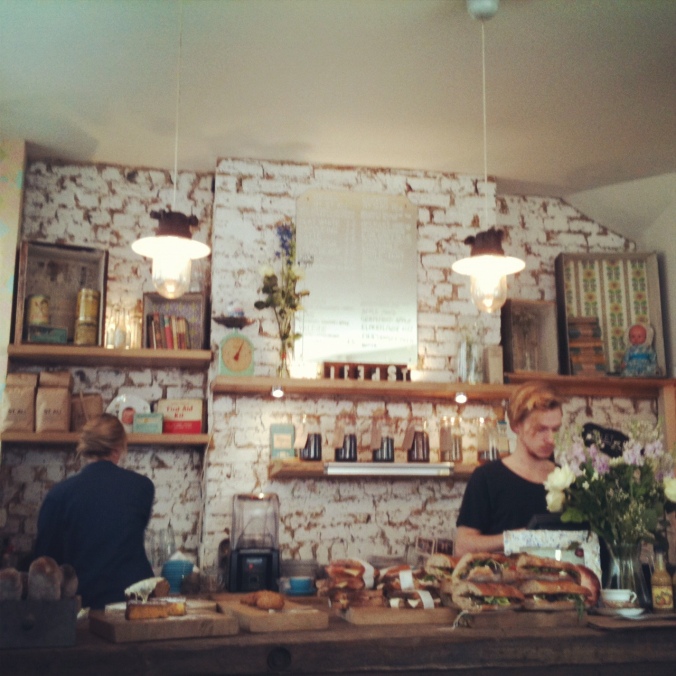 Their menu is modest, offering mostly egg-based brekkies. A lot of their menu seems to offer classics with a twist; omelette with feta cheese nestled between the spinach and mushrooms, and banana bread with passionfruit.

Their breakfasts feature sourdough bread; light and spongey and great for mopping up the orangey yolk. The presentation of all the cooked food is beautiful – try and spy the English breakfast on the serving spot by the kitchen in the picture above. Nice garnishes like rocket and vine tomatoes that compliment the food rather than overwhelm it (hello corriander/parsley etc). 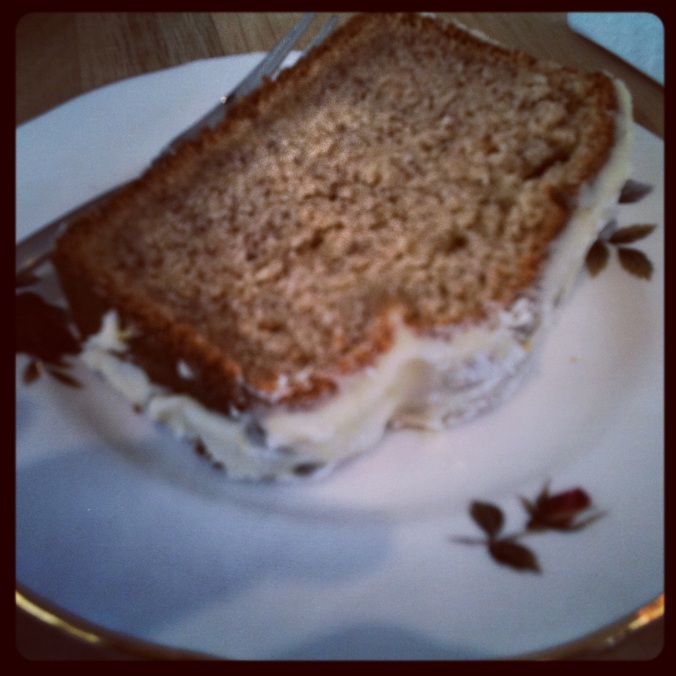 Eggs Benedict, omellete, a pot of tea, cappuccino and a slice of banana bread came to £22; pretty similar to other Balham coffee spots. We like. Just go before 1pm to grab a table or be disappointed.

PS: they seem to have an occurring theme of dolls heads dotted around the place, and on the menu. When asked why, the answer was “because it’s fun”. OK.